Eco-friendly and almost free energy: Armenian communities switch to biogas thanks to EU

Natural gas is not always available in some parts of Armenia due to the lack of oil and gas reserves, as well as poor infrastructure due to the mountains. However, sometimes even when it is available people still refuse to install gas line services in their houses simply because they cannot afford to pay the bills. Instead, they try to find alternative more accessible and more affordable energy sources.

The EU supports the use of alternative energy in Armenia. It has helped two communities in Gegharkunik province – Geghamasar and Areguni – to build greenhouses and install heating equipment that uses biogas produced from manure. This allows the communities to gain profit and create new jobs locally.

"Successful transformation of the rural economies of Gegharkunik and Syunik regions has been possible due to the application of new technologies and skills and the use of renewable energy (biogas and solar). New jobs and greater incomes are provided by the EU project implemented by Shen NGO," says Andrea Baggioli, Energy Task Manager at the EU Delegation to Armenia.

The snowball effect of eco-friendly heating

Geghamasar is 150 kilometres away from the country’s capital, Yerevan. Despite the fact that natural gas is available in neighbouring communities, the residents of Geghamasar could not afford to connect to the gas network. People in Geghamasar generally earn their living by farming and cattle breeding, and recently, with EU support, the residents of Geghamasar built one of the biggest greenhouses in Gegharkunik province. It measures 1,200 m2 and it is heated by biogas produced from a sustainable source that until now has been disregarded: manure.

It all started in 2017 with the foundation of the Geghamasar cooperative. With the help of Shen NGO they received support from the European Union to build a greenhouse and a biogas production facility that they use for heating the greenhouse during the cold months. The main goal was to grow organic vegetables for Armenian consumers.

However, it was not an easy path. During the trial period, they faced technical problems, which according to them, became a reason for members of the cooperative to unite. They were working in the greenhouse after their regular job hours. Sometimes they were even staying there overnight in order to make sure the technical issues were resolved. According to members of the cooperative, the project united them and transformed them into a family.

Gagik, a worker at the Geghamasar cooperative

Hasmik, a worker at the Areguni cooperative

Radishes grown in the greenhouse in Geghamasar

“The production and use of biogas was an innovation for us – something we hadn’t heard about before. Now people are gradually getting used to it, they understand that they can receive energy from animal waste and realise the importance of eco-friendly heating,” says Gagik Abrahamyan, Head of the Geghamasar cooperative.

He adds that people in Geghamasar are mainly engaged in cattle breeding, so biogas, which is produced from manure, is a natural solution for the community and also the cheapest one. “Biogas helps us to save money and invest in further development. The cooperative aims to provide 23 members of the community with stable jobs.”

The biogas can also be used for producing electricity when it’s not being used for heating the greenhouse, and the Geghamasar cooperative plans to sell the energy to the electric networks and get additional income to develop the cooperative further.

Karen Abrahamyan, a member of the Geghamasar cooperative, believes that biogas only has advantages and opens a wide range of opportunities: “With this project, we are able to kill two birds with one stone: we produce organic vegetables and keep our environment free from dangerous toxins. There are no extra expenses and it is eco-friendly; it is the best solution for small communities like Geghamasar.”

The cooperative mainly cultivates tomatoes, cucumbers, and radishes. The plants are irrigated by the drip irrigation method, which is one of the most effective and eco-friendly options as it takes less time, gives better results and creates better conditions for the plants. The cooperative plans to produce up to a tonne of vegetables per year and to increase that number in the near future.

The vegetables are going to be sold in Armenia and the income will be used to pay the salaries of the workers. The profit will be invested in the future development of the cooperative. Gagik Abrahamyan says that one of their goals in the near future is to buy a truck to transport the vegetables.

Armine Boyakhchyan, a resident of Geghamasar, has worked in the greenhouse since the very first day. According to her, after the installation of the greenhouse life in Geghamasar became more active: residents are interested in the innovation and they want to help. “People are very excited that jobs are being created in our community. The cooperative raises their hopes. They hope that if everything goes well they can stay and work here at home and they will not be forced to leave the country. We in turn are doing our best to produce high-quality organic products. The achieved result already inspires us to continue to work harder and to motivate others to do the same.”

Besides the greenhouse, the EU supported the community to build a deep well. “In this regard, the cooperative and the residents of Geghamasar cooperate efficiently, as it gives them an opportunity to use the well to irrigate the farm plots and cultivate more plants besides wheat and barley. As such, they can make much more profit,” Gagik Abrahamyan says.

The example of Geghamasar cooperative inspires not only the residents of Geghamasar but neighbouring communities as well. Gagik Abrahamyan explains that the residents of neighbouring communities have heard about the project and visited Geghamasar to learn about the greenhouse and biogas production. Now they also want to install similar facilities in their communities. “It has created a snowball effect. Everything started with the idea. The EU appreciated our initiative and now more and more people are interested in the system. With our experience, we showed that nothing is impossible: hard work, a good team and a supporting partner can help achieve the impossible.”

About 10 minutes from Geghamasar is Areguni, the second community in Armenia’s Gegharkunik province that has started to use eco-friendly biogas. Young people in the community founded the Areguni cooperative in order to stop emigration and help residents of the community to understand that they can achieve more when they cooperate. The EU helped Areguni to build a greenhouse and a biogas production system to heat it. Now the cooperative has seven workers and they plan to increase the number to 26.

“If there are jobs in the community, emigration decreases. With our work we aim to help as many people as possible to stay in their village,” explains Hayk Vardanyan, Head of the Areguni cooperative.

According to Hayk, they needed to pay AMD 25,000 (€46) for firewood in order to heat the greenhouse for two weeks. After switching to biogas, the cost of heating is almost nothing since they use manure for biogas production. This relieves the financial burden and gives the cooperative a chance to create more jobs. “Biogas is much more affordable, as there is a lot of manure in our village. Roughly speaking, heating has become almost free for us. It is very important that an ordinary farmer can afford to use biogas.”

Areguni has a rich variety of wild plants, so the cooperative also decided to install a dehydrator for fruits and plants. This will give residents in the community an opportunity to sell their harvest of wild berries and herbs to the cooperative. The cooperative has not used it yet, but they plan to dehydrate the harvest and generate extra income.

Gohar Movsisyan is a resident of Areguni. She contributed a lot to the development of the greenhouse. She has already cultivated 300 kilograms of beans, which she says were of very good quality. They are planning to increase that number to 1 tonne per year. “The residents of Areguni don’t have many options for heating; sometimes it is even hard for them to heat their houses. Usually, they dry manure and burn it so that they can heat their houses and survive the winter. Biogas is much easier to use, much more affordable and much more effective,” says Gohar, adding that it was a dream come true for the community to have such a greenhouse, as the lack of natural gas and funds made it impossible even to consider it. Some of the residents left the community, and even the country as they didn’t think that they could find work in Areguni. “If we compare the situation to before, now it’s much better. We have jobs, and those who don’t, can sell their products to the cooperative and can earn some income. Our dream has come true; people hope that they can work in their native village.”

With the support of the EU, the Geghamasar and Areguni communities have become pioneers in Gegharkunik province. The cooperatives are trying to improve the everyday lives of the members of the communities, to prevent emigration and to create a good image of their communities, and at the same time not to harm the environment and to motivate people to adopt an eco-friendly lifestyle. The cooperatives, however, have not limited themselves with this – they also spread the word and help other communities to join this eco-friendly and affordable innovation. 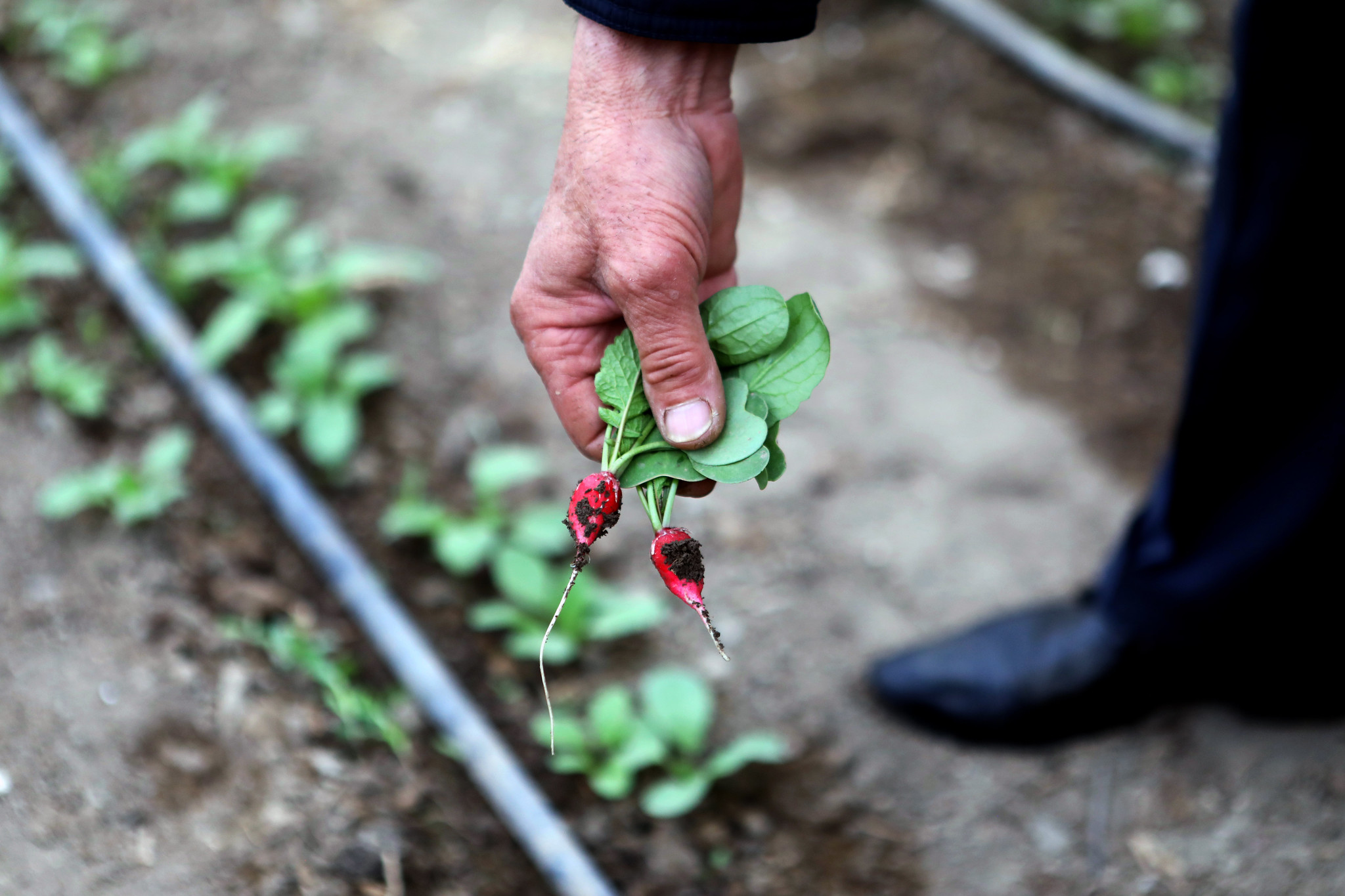