Ukrainian IT specialist Anna Krys and her team have developed PROVIDNYK, an interactive map to help people with limited mobility to live fuller and more active lives. The innovation was recognised with an award from the Eastern Partnership Civil Society Facility.

Where did the idea come from?

Anna previously worked for an international IT company in Odessa. In 2015, Anna moved to Dublin when her unit was relocated to Ireland. Later on, she began working for the EU-supported project Smart Villages. Living in Killorglin, a small Irish town with just over 2,000 residents, Anna helped to develop the project’s technological capacity.

After 3.5 years in Ireland Anna returned to Ukraine earlier this year: "I remember arriving back in the city with all my suitcases from the airport. I realised how inaccessible Ukraine is for people in wheelchairs, people with suitcases and parents with strollers," explained Anna.

The current mobility solutions in Ukraine exclude people with limited mobility from society and political processes. "90% of ramps are installed incorrectly; Ukrainian public transport is not designed for people with limited mobility and some businesses are designing and constructing seemingly inclusive sites for their own sake without realising the possible risks of injury," said Anna.

Frustrated with existing obstacles to mobility, she decided to change things: "I wanted to create a map that would not only mark accessible and inclusive infrastructure but also consolidate society so that all people could engage with the map," she explained.

"Then, one of my colleagues sent me a link to the EU project Ukraine participates in as an Eastern Partnership country," recalled Anna.

Anna Krys tells how the project idea was born to a journalist from espreso.tv

Anna walks in the centre of Kyiv

Mobile application developed by Anna and her team

Mobile application developed by Anna and her team

How did the European Union help to implement this idea?

Anna brought her idea to the Hackathon, organised by the EU-funded project Eastern Partnership Civil Society Facility, Regional Actions, along with participants from the six Eastern partner countries: Armenia, Azerbaijan, Belarus, Georgia, the Republic of Moldova and Ukraine.

In May 2019, over 30 project ideas from the six countries went through the first round of selection. 20 projects were then presented at a three-day Hackathon in Tbilisi at the end of June.

Designers, programmers and people with innovative ideas formed teams and participated in the Hackathon. A designer from Ukraine and an IT-programmer from Belarus joined Anna in Tbilisi.

"The Hackathon led to the creation of a website prototype for the map. Working with mentors was important to me. Thanks to the synergy and communication, I went to Tbilisi with one product and presented quite a different, much better one at the finals," Anna recalled.

Three projects, including PROVIDNYK, were pre-selected by mentors' and participants' votes at the finals and nominated for the EU Digitalisation for Civil Society Award.

"Finally, at the end of August we received the letter congratulating us on our project, an award and €10,000 to implement and introduce our project to the market within six months," said Anna.

Anna and her team won the annual ‘ EU Digitalisation for Civil Society Award for ideas seeking to improve the life of communities.

What will you see on the map?

The PROVIDNYK interactive map will help people with mobility limitations to find the best and safest routes and enjoy more active lifestyles. The map will ultimately stimulate the development of inclusive urban infrastructure. The first software prototype is available here.

The map is currently only for Ukrainian cities Kyiv and Odesa, however Anna’s team plan to develop the map to cover the entire country.

The map enables users to upload their photos and comments about locations with low accessibility for moderators onto the app in order to inform others, develop accessibility in the locations and add them to the map.

"Soon users will be able to rate the sites in terms of accessibility in a similar way to Google Maps," she explained.

There will be ratings for ramps, baby-changing rooms, dates and times of accessible public transport, etc.

There will be filters and categories available for each type of rated site, depending on the scope.

Anna Krys tells how the project idea was born to a journalist from espreso.tv

Anna Krys shows mobile application she developed with her team

Anna Krys shows mobile application she developed with her team

"If 10 people upload complaints about a certain site, a request form would automatically be emailed to the respective authority. We would then track the feedback and report on it on the website," explained Anna.

“Additionally we plan to create checklists and consult with businesses if they have no funds available to hire a specialist to monitor inclusion compliance.”

According to Anna, PROVIDNYK plans to launch their fully operational map in April 2020, and while they are working on it, if need be, the team can always turn to the EU project for advise and support.

Article published by espreso.tv in Ukrainian and Russian 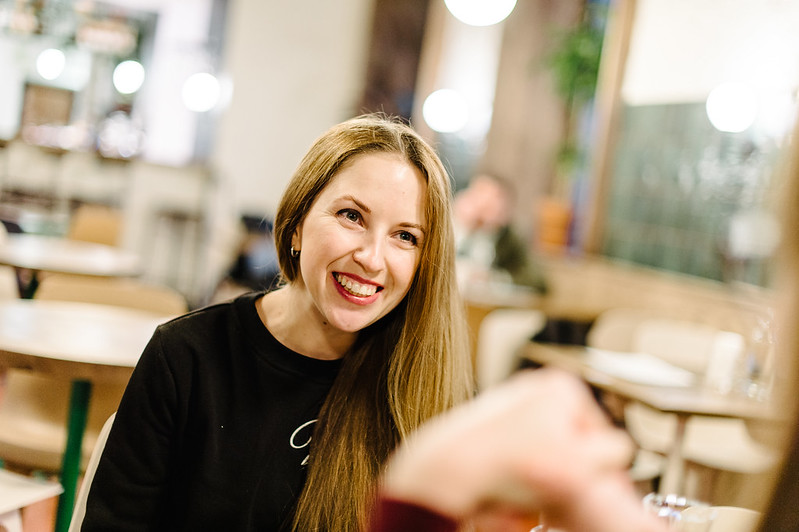